What Does The Governing Board Do?

The Corcoran Unified School District Governing Board consists of a group of elected trustees who work together to create an environment consistent with the district’s mission. The board meets regularly to address school policies, evaluate staff, set educational goals, and ensure our district is managing its finances responsibly.

The school board meets on the 2nd and 4th Tuesday of each month (subject to adjustments due to holidays or special circumstances) in the CUSD boardroom located at 1520 Patterson Ave. We invite members of the community to attend our regular board meetings and participate in board discussions. Stay informed by referring to the upcoming meeting agendas and minutes from our past meetings.

Meet Our Board Members

Berenice Alvarez arrived in Corcoran when she was eight years old without speaking or understanding English. Thanks to the help of great teachers, she learned the language in less than a year. She grew up in a family of farmworkers, which helped her understand what families in the community experience. She graduated from Corcoran High School in 2010. Fast-forward to today; she holds a bachelor's degree and a master's degree. Currently, she works for a neighboring school district as their Chief Business Officer. Working for a school district has given her the experience and the knowledge to understand many of the complexities and challenges attached to public education. She will bring that experience to the Corcoran Unified School District Board to make the best decisions for our schools.

Ms. Alvarez strives to sit on the board with the perspective that not only as someone who works for a school district but also as a parent and member of this community. She decided to take this opportunity to ensure we are serving all of the children in the community; one child is no more important than another. She firmly believes that the district has tremendous teachers and staff working with our children. Education takes place in the classroom and feels that the board's efforts must enhance and enrich what goes on there. She wants what is best for our students. She will help ensure all the resources and opportunities are available for them to be successful.

Local businesswoman Patty Robertson was sworn into office as a member of the board of trustees on September 22. Mrs. Robertson was appointed trustee for area three following a resignation. She grew up in Tulare but has lived in Corcoran for the past 44 years with her husband Jerry Robertson (Corcoran city councilman). Their children, Jeremy and Jennifer, both graduated from Corcoran High School. Her grandchildren have also attended Corcoran schools.

Patty has owned and operated several local businesses, including T-Shirt Express, Corcoran Uniform, and Safety Management Systems. Along with her husband, she has owned Jerry’s Drug (Corcoran, Tulare, and Woodlake stores) and Jerry’s Self Storage. She handles payroll for her businesses, as well as makes day-to-day business decisions.

Mrs. Robertson has been active in several organizations. She currently serves on the board for Corcoran chamber of commerce. She is a member and past president of Corcoran 50-50 club. In addition, she has been on the board for the South Central California Women’s Aglow Area Board, where she held the position of president for five years and for a short time was on the organization’s international board panel of presidents. She was instrumental in establishing Corcoran Community Church where she is a worship leader.

Patty is known to be an outstanding singer and pianist. She loves to cook and spend time at her family’s cabin in the nearby mountains. She also enjoys casual traveling and camping in the desert. Both places fill her need to relax in a peaceful setting.

When asked about her desire to sit on the school board, she stated, “I asked myself what I would have to offer the district as a board member. That would be a ‘clean canvas,’ which the district would help me paint. I would come without much understanding of the workings of the school board, but I would be one that is willing to listen and learn, always striving to make good common sense decisions with the guidance of all. I am interested in children and, in fact, I have a deep love and concern for their future. Being a small part of securing their education, which will ultimately change their lives is an awesome task. If I can be a part of helping to enrich their lives in a positive way. I am a willing volunteer.”

Superintendent Rich Merlo says, “We are very blessed to have Mrs. Patty Robertson as part of our governance team. She is known to be a very well respected and giving member of our community, whose perspective and experience will serve our board and our school district.”

Trustee Sammy Ramirez is a lifelong resident of Corcoran. Both he and his wife attended local schools, as well as their six children. Their youngest currently attends Corcoran High School. His wife has been a third grade teacher at John C. Fremont Elementary for 29 years.

Mr. Ramirez recently retired from a 28-year career with the California Department of Corrections and Rehabilitation. During his career with the department he promoted numerous times. His final position was as a special agent with the internal affairs unit.

While his children were growing up, Mr. Ramirez volunteered at their schools. He was also very active with youth sports, coaching basketball and soccer with the YMCA. In addition, he trained youth boxers with the Police Activities League (PAL). Mr. Ramirez is a past president and current vice president of Kings County Latino Peace Officers Association (LPOA). The organization gave numerous scholarships to deserving Corcoran High School graduates. He is also an active member of Our Lady of Lourdes Catholic Church.

Mr. Ramirez believes that education is the foundation for a successful future and that all children deserve a hostile free safe learning environment, free education, and to be treated with respect and dignity. It is these beliefs that help him make decisions that will be beneficial for the students of Corcoran Unified School District.

Our Full District View and Plan 2 - Balanced Area maps are available here for your reference. 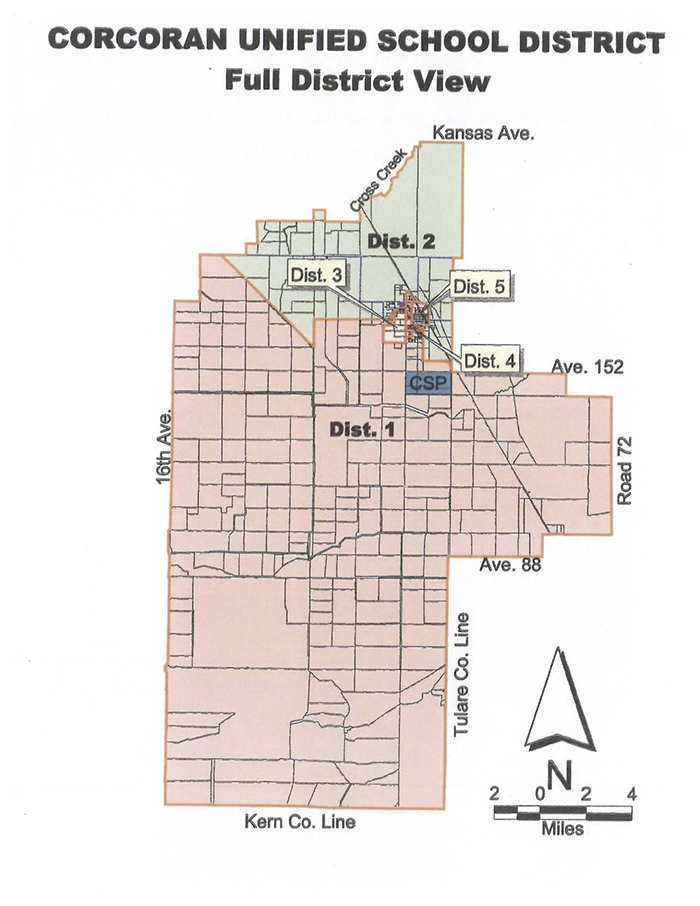 Our SchoolWorks Map Plan B is available here for your reference. 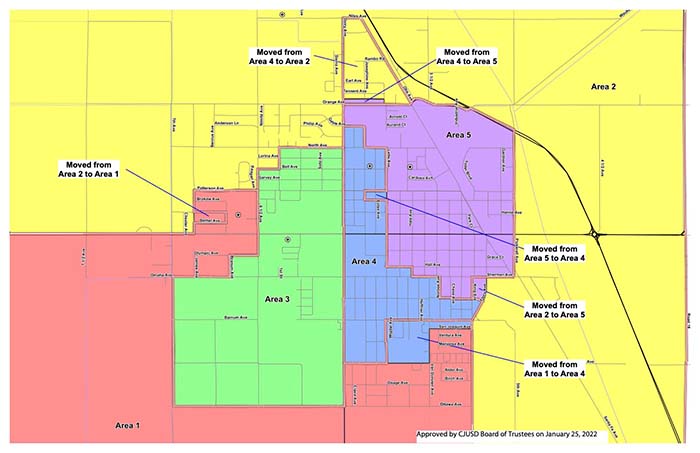 We invite you to review our meeting packets. Along with our upcoming agenda, we have included the packet of supporting material in one convenient location.

We will post the minutes after they are approved by the board, usually after the following meeting.

We have created an archive of meeting agendas, minutes, and packets with one additional school year of records for your reference.